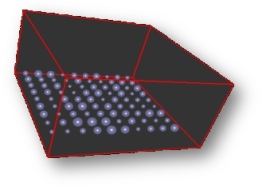 There are several ways of doing the picking in OpenGL:

So let’s get started!

Before we start, please look at our target for the article:

Read more to find how to create such application!

We would like to create a ray, starting in mouse position at the near plane. Then we will test what objects collide with the ray.

Creation of the mouse ray

TODO: gluUnProject is deprecated. But it can be easily replaced by the glm lib for instance.
NOTE: instead of glGet* we can provide custom matrices, from our own math lib, like GLM.

Here are a few lines of code:

As you can see we use gluUnProject two times: one for the starting point (on the near plane), and the second time for the end point of the ray (on the far plane).

Collision between the ray and a sphere

What we have right now is the mouse ray and a bunch of objects in the scene that we want to check if there is a collision between them and the ray.

As you can see in the picture the mouse ray hits yellow ball that is in the scene. Of course testing collision between the ray and a sphere is one of the simplest cases. It is a good starting point for more advanced collision tests: with AABB (Axis Aligned Bounding Boxes), OBB (Oriented Bounding Boxes) or even arbitrary meshes. On the other hand usually we have “hierarchy” of collision tests: from simple to more advanced… so testing with spheres is usually a must-have tool.

Just find the distance between the ray (3d line) and the center of the sphere. If that distance is less then the radius of the sphere then we have a hit!_

Here is a bit of code for calculating the distance between line and a point:

Not so hard. Of course if you choose more advanced shapes this will complicate a bit…

Now we need to put that test in proper place. Ray calculation needs camera matrices. We can do our test in the Render function just after we set up our camera matrix.

But wait…! Did I miss something?

We usually have several… or several thousands of objects, how to test the collision? Let us look inside the CheckHitTestBetweenPointsInTheScene.

Basically it is a simple brute force solution: run through all the points (spheres), find the closest one to the mouse ray and then treat this object as a hit. Please notice that although the ray can hit several objects, we choose only one.

Dragging point by the mouse

OK We have a hit! What to do next with that? We need to handle the mouse input: detect if we are dragging a point and finally move the point. Here is a bit of code for dragging:

We process mouse buttons and when LBM is pressed and we detected a hit… then we can drag that point. Then in the Update proc we can change position of the point. Remember that we can move point only on the plane parallel to the camera front plane. We save “T” param from the hit test (from the line equation), and when we move mouse we use that “T” param to calculate new position in the 3D space.

now in the Update proc we can move point by simply:

Or better way: We could use some spring system equation.. but this is your homework.