Include Guards, Pragma Once, Predeclarations and other hints that might be useful when dealing with includes.

What can we do with file including in C++? Do we need to put all the other header files of the project (plus third party libraries) in every file all the time? For sure there have to be some rules to manage that issue properly.

The issue covered in this blog post is of course nothing new. Every Cpp programmer should know how to use #include correctly. But somehow I still see lots of code where there is a mess and compile times takes too much time… What is worse (as it is in most other cases), even if you try for some time to use some good #include policy, after a while chaos still lurks from the files. I am of course also responsible for such mistakes.

What is the problem?

Why is this so important to minimize amount of header files and include statements?

Here is a generic picture: 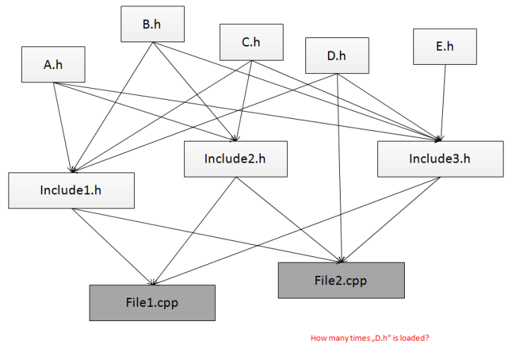 Do you see the answer here? Of course your program may have far more complex structure, so add another 100 files and connect them randomly.

If there is to much redundancy the compiler needs to work considerably longer.

As we see we can reduce substantially number of includes by using pointers or references for members or arguments declarations. In general we should have only a minimal set of files that is needed to compile the file. It is even possible to reduce this number to zero.

And in the source file

Is there a hope?

Header files can be very problematic and it is, definitely, not a great feature of the C++ language. If you include too much your compile time can grow and grow. And it is not so easy to control it. But what are other options? How other languages handles similar issue?

It is hard to compare compilation of Java and C# to C++: C++ produces native binary code that is optimized for the particular architecture. Managed languages compile to some form of intermediate language that is much easier that the native code. Worth to mention is the fact that managed languages uses modules (not includes) that are almost final version of the compiled code. That way compiler does not have to parse a module again and again. It just grabs needed and compiled data and metadata.

So it seems that lack of modules is the main problem for C++. This idea would reduce translation unit creation time, minimize redundancy. I have already mentioned it some time ago: modules in cpp via clang (here or here). On the other hand C++ compilation is very complex and thus it is not so easy to introduce and what is more importantstandardizethe module concept.

In the near future I will try to post here some benchmarks regarding compilation time and #include tricks.

Article is posted also on the CodeProject