One of the most crucial part of a particle system is the container for all particles. It has to hold all the data that describe particles, it should be easy to extend and fast enough. In this post I will write about choices, problems and possible solutions for such container.

What is wrong with this code?

And then usage of this class:

Actually one could say that it is OK. And for some simple cases indeed it is.

But let us ask several questions:

All of above problems must be addressed in the design phase.

It was not visible in the above code, but another important topic for a particle system is an algorithm for adding and killing particles:

How to do it efficiently?

It looks like particles need a dynamic data structure - we would like to dynamically add and delete particles. Of course we could use list or std::vector and change it every time, but would that be efficient? Is it good to reallocate memory often (each time we create a particle)?

One thing that we can initially assume is that we can allocate one huge buffer that will contain maximum number of particles. That way we do not need to have memory reallocations all the time.

We solved one problem: often buffer reallocations, but on the other hand we now face a problem with fragmentation. Some particles are alive and some of them are not. So how to manage them in one single buffer?

We can manage the buffer it at least two ways: 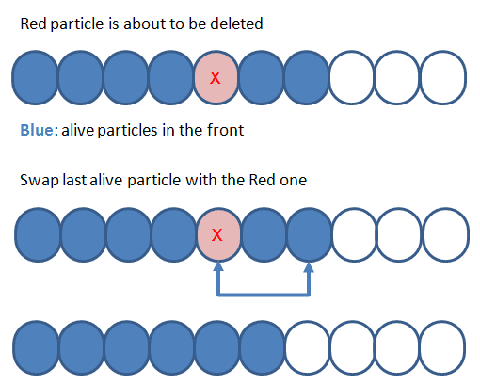 As you can see in the above picture when we decide that a particle needs to be killed we swap it with the last active one.

This method is faster then the first idea:

In the article I’ve introduced several problems we can face when designing a particle container. Next time I will show my implementation of the system and how I solved described problems.

BTW: do you see any more problems with the design? Please share your opinions in the comments.