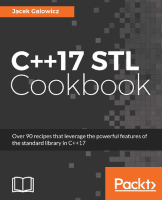 C++17 is on the way, and I’m glad to see more books that stay on the bleeding edge of C++ adaptation. Today I’d like to present a book that focuses on the Standard Library.

Is this another great book?

Plus I have a bonus: Q&A with the author and a giveaway.

Github Repo with the samples

Currently @Amazon you can buy a printed copy, if you want a DRM-Free ebook go to Pack Publishing store: C++17 STL Cookbook.

Also, it’s worth mentioning that Arne Mertz from Simplify C++ helped with the book, as he was the technical reviewer.

BTW: I noticed Jacek around like one year or more ago and was happy to see another Polish guy writing about C++. I was misled by his Polish sounding surname. As it turned out Jacek is German with roots in Poland, so my initial guess was not 100% correct. So, I still had to communicate in English :)

The cookbook contains over 90 recipes, 500+ pages, full of STL content and samples.

It’s not aimed at beginners. It might be great as a second or third book after an introduction to C++.

Here’s a summary of chapters:

A review of new features, with examples.

6: Advanced Use of STL Algorithms

If you only skimmed the previous section, please go back and read what’s inside those ten chapters. I can wait :)

What’s clear is that most of the recipes are a solid, working examples/demos. Of course, there are many introduction sections to give you a background, but most of the time you just work on a small app, or tool. So those are not just tiny, theoretical, impractical code samples. If you finish a chapter, you can be sure to end with something useful.

Nor is this a reference book. You can find introductory explanations, but in general, it will teach you how to use STL efficiently by working on real problems.

Regarding the amount of experience needed to understand the chapters, it varies a lot. There is some basic stuff that everyone (after an intro to C++) should get. But there are also complicated examples where you’ll need to read the section several times (at least I had to! :)). That’s good. Having all recipes on the same level would be boring. With such mixture, everyone can find something for themselves and also have some challenge with more advanced problems.

A few of recipes that caught my attention:

The example is maybe complicated; I had to read it several times to understand. Still, it shows how to compose the solution using smaller blocks. So you’ll be using functions that return lambdas, complex numbers, std::transform.
You have even two variations: a basic version and the parallelized one!

The object pcout makes sure the whole string is printed to stdout without any interruption as you could get with the standard cout.

Using _GLIBCXX_DEBUG, or (/D_ITERATOR_DEBUG_LEVEL=1) in MSVC.
It’s great that the book brings up that topic. Iterators are powerful, but they can quickly become invalid when used in the wrong way. The recipe shows how different tools can help when debugging such cases.

Zips, composing functions, lambdas. Functional programming gets more and more popular, so I like that Jacek shows a few ideas in the examples.

The example shows how to distribute the sub-tasks of a problem as an automatically parallelizing asynchronous version. The lambdas returning lambdas are a bit hardcore, but it works :) The example uses this for strings operations, but you can adapt the tiny library for any domain.

Going back to a general overview:

Jacek also conveys a crucial message throughout the book. For example:

“At this point, we are using STL data structures so intuitively that we can nicely avoid pointers, raw arrays, and other crude legacy structures.”

Similar messages appear in several parts of the book. When you know STL you can build your apps much faster, and more safely, and compose code as if you were sticking Lego blocks together. It’s also a modern style of C++ - not using raw code structures or reinventing everything from scratch.

All in all, great stuff.

Plus, as always its cookbook style makes it easy to read, which I like.

Before we go to the summary, I’d like to show you a little interview with the author:

Q&A with the author

Bartek: How did you come up with the idea for the book? Why did you want to write about STL?

Jacek: It was actually not my own idea to write a book at all and specifically about the STL. Nitin Dasan, a very nice Acquisition Editor at Packt Publishing, approached me and asked very directly if I was interested in writing a book for them. Back then, the title “C++17 STL Cookbook” was already fixed.
At that time I was unemployed because my former employer shut down the whole site I was associated to. Since I was seeking to become self-employed rather than just looking for jobs somewhere else, writing my own book looked like a great opportunity. The next step was compiling a list of ~90 recipes that I would write for the book, which Packt then accepted and sent me a contract.
While the book title and format (a cookbook with recipes) were fixed already, I still had a lot of freedom: What would the recipes be about and how would they use C++17 and the STL?
I tried to do as many things with the STL as possible. As you noticed in your review already, I did even avoid for-loops. My idea was to demonstrate that the STL is not only a library of neat little helpers but actually a foundation of building blocks whole applications can and should build on. Everyone who does not realize this tends to reinvent the wheel here and there. If you rewrite something that the STL already provides, you ditch the fact that all these algorithms and data structures are usually well designed, well tested, well performing, and keep your code well readable and maintainable. C++ programmers should perceive the STL as standard building blocks that are just linked differently in every C++ program (this perspective is now pointedly oversubscribed).
The reader might find that sometimes extreme. But then, he/she is completely free to pick what he/she liked and leave the rest. My hope is that this books really shows the audience something new and that it is inspiring.

Bartek: What was the hardest part of writing the book?

Jacek: The recipes in the book are all about C++17 and the STL. This means that they should only require a C++17 capable compiler and the STL. It was hard to find about 90 meaningful and interesting example problems and applications that are short but self-contained enough, as they need fit into the typical 4-8 pages recipe format. It would have been easier to find nice real life examples if the STL was already including features like networking and so on. Including external libraries would have missed the point of the book and might have made it harder for users of different operating systems to follow them, so I strictly avoided that.

Bartek: What’s your favourite feature of C++17 (a language or STD library feature)?

Jacek: My favorite little list of new features is:

Bartek: What other C++17 books would you like to see?

Jacek: In general, I love books that make me change my thinking and shake me out of developing in old patterns I was always used to.
I would especially love to see more books from 2 groups of developers:

Another solid book about C++17 just before the C++17 Standard is announced!

Not aimed at beginners, but if you have some experience with C++, you’ll find something for yourself. The chapters are structured to be as clear as possible, with introductions and even pictures and diagrams.

Some time ago I had reviewed C++ Modern Programming Cookbook. These two books don’t compete much with each other, and I’d suggest reading them both. “C++ Modern Programming” is focused on all levels of experience (also for ‘almost’ beginners), while “C++17 STL Cookbook” is for an intermediate/expert level. You’ll find some good introduction in the first book, and then you can continue forward and gain more from the second book.

The Giveaway has ended!

Here are the winners: