Vector of Objects vs Vector of Pointers

Memory access patterns are one of the key factors for writing efficient code that runs over large data sets. In this blog post, you’ll see why there might be a perf difference of almost 2.5x (in both directions!) when working with a vector of pointers versus a vector of value types.

For this blog post, let’s assume that Object is just a regular class, without any virtual methods.

Ok, so what are the differences between each collection? Let’s make a comparison:

The memory is allocated on the heap but vector guarantees that the mem block is continuous.

On the diagram above, you can see that all elements of the vector are next to each other in the memory block.

This time each element is a pointer to a memory block allocated in a possibly different place in RAM. We use unique_ptr so that we have clear ownership of resources while having almost zero overhead over raw pointers.

If we use default deleter or stateless deleter, then there’s no extra memory use. You can read more in a separate blog post: Custom Deleters for C++ Smart Pointers

With shared_ptr we have a collection of pointers that can be owned by multiple pointers. This can simulate, for example, references in C#.

This time, however, we have a little more overhead compared to the case with unique_ptr. To support reference counting the shared pointer needs to have a separate control block. Inside the block, there is a place to store the reference counter, the “weak” counter and also the deleter object.

Full repository can be found here: github/fenbf/PointerAccessTest but the code is also tested with Quick Bench:

There’s also experimental code at https://github.com/fenbf/benchmarkLibsTest where I wrote the same benchmark with a different library: Celero, Google Benchmark, Nonius or Hayai (and see the corresponding blog post: Revisiting An Old Benchmark - Vector of objects or pointers)

Core parts of the benchmark:

To have a useful example for the object class I selected the Particle class which can simulate some physical interactions and implements a basic Euler method:

The Particle class holds 72 bytes, and there’s also some extra array for our further tests (commented out for now). The update() method is simple, has only several arithmetic operations and a single branch. This method will be memory-bound as all operations inside are too simple.

And also here’s the code that benchmarks std::sort:

When you allocate hundreds of (smart) pointers one after another, they might end up in memory blocks that are next to each other. This can affect the performance and be totally different than a regular use case when objects are allocated in random order at a random time and then added to a container. To mitigate this issue, the benchmark code adds a randomisation step: ShuffleVector().

Before randomisation, we could get the following pointers' addresses:

The second table shows large distances between neighbour objects. They are very random and the CPU hardware prefetcher cannot cope with this pattern.

Vector of objects is just a regular vector with one call to the update method.

The results for the update() method

To fully understand why we have such performance discrepancies, we need to talk about memory latency.

Here’s a great summary that explains the problem: 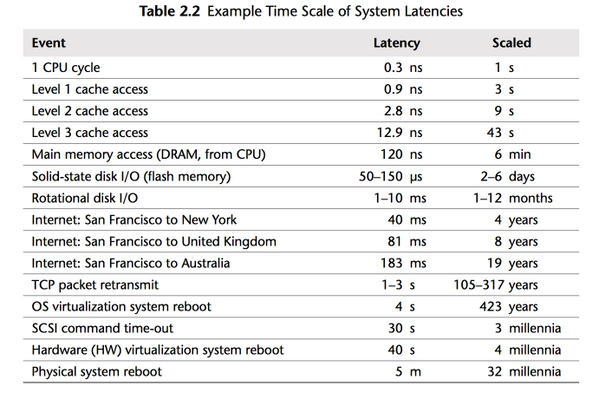 The picture comes from the book: Systems Performance: Enterprise and the Cloud

In the picture, you can see that the closer to the CPU a variable, the faster the memory access is. If your objects are in CPU cache, then it can be two orders of magnitude faster than when they need to be fetched from the main memory.

So, why it is so important to care about iterating over continuous block of memory?

Let us look at out main loop:

But CPUs are quite smart and will additionally use a thing called Hardware Prefetcher. CPU will detect that we operate on one huge memory block and will prefetch some of the cache lines before we even ask. Thus instead of waiting for the memory, it will be already in the cache!

What about the case with a vector of pointers?

For 1000 particles we need on the average 2000 cache line reads! This is 78% more cache line reads than the first case! Additionally, the hardware Prefetcher cannot figure out the pattern - it is random - so there will be a lot of cache misses and stalls.

In one of our experiments, the pointer code for 80k of particles was more 266% slower than the continuous case.

Results for the sort() benchmark

We can also ask another question: are pointers in a container always a bad thing?

.. ok… what happened there?

As you can see this time, we can see the opposite effect. Having vector of objects is much slower than a vector of pointers.

Here’s another result when the size of a Particle object is increased to 128 bytes (previously it was 72 bytes):

See the benchmark at @QuickBench

The results are because algorithms such as sorting need to move elements inside the container. So they not only read the data but also perform a copy (when the algorithm decides to swap items or move to a correct place according to the order).

Copying pointers is much faster than a copy of a large object.

If you know that copying is a blocker for the elements in the container, then it might be good to even replace the sorting algorithm into selection sort - which has a worse complexity than quicksort, but it has the lowest number of “writes”. So, as usual, it’s best to measure and measure.

In the article, we’ve done several tests that compared adjacent data structures vs a case with pointers inside a container. Most of the time it’s better to have objects in a single memory block. Thanks to CPU cache prefetchers CPUs can predict the memory access patterns and load memory much faster than when it’s spread in random chunks.

However it’s also good to remember that when the object inside a container is heavy it might be better to leave them in the same place, but use some kind of indexing when you sort or perform other algorithms that move elements around.

And as usual with those kinds of experiments: pleas measure, measure and measure - according to your needs and requirements.

Do you try to use memory-efficient data structures? Do you optimise for memory access patterns? Or maybe you have some story to share? Let us know in comments.

You can also have a look and join discussions in those places: