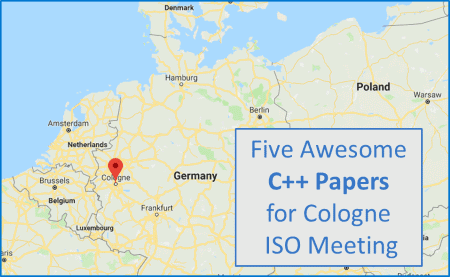 Today is the start day of Summer C++ISO meeting, this time in Cologne, Germany! This is the “feature-complete” meeting for C++20. It’s the last time we’ll see some new elements that are merged into the working draft.

Let’s see what’s already in C++20 and let’s have a look at some smaller, but very handy proposals that might get into the standard. This is similar to article that I did for Kona and San Diego Meetings.

Thanks to various trip reports and especially r/cpp threads we can gather a list of features that are already merged into C++20. I tried to list the most essential elements.

(*) Although a lot of items are “merged” into the working draft of the Standard, it’s still not 100% guaranteed that a particular feature will be in the final Standard. There are several review stages that the whole draft has to pass.

At cppreference there’s also a single list with all C++20 features: C++2a features

The first meeting that discussed and merged things for C++20

Additionally, during this meeting, the Committee agreed on a single plan for modules, so there’s a higher chance we’ll see them in C++20.

Today (Monday 15th July) the Cologne Meeting has started. There are over 300 papers proposed so the Committee has a lot of to discuss!

A few days ago Herb Sutter created a poll that hopefully will help to add your voice into the prioritization of the proposals.

Have a look: Your “top five” ISO C++ feature proposalsl

Herb Sutter also published another blog post with a FAQ of the current standardization process. That’s a great way to learn about why we have 3-year cycle, why C++20 is much bigger than C++17 and C++14 and what’s the overall plan.

Draft FAQ: Why does the C++ standard ship every three years?

The next meeting will also take place in Europe, this time in Belfast in November 2019.. and then in Prague Spring next year.

You can always find the list of ISO meetings here:
Upcoming Meetings, Past Meetings: Standard C++

The papers (mailings) for the upcoming Cologne meeting can be found under the following link:
JTC1/SC22/WG21 - mailing2019-06.

or in a easier-to read form:

Below you can find my list of papers that brought my attention. The papers might still not be in merged C++20!. Those are not big features like Modules, Ranges, Networking… but rather some smaller items that should also simplify the language and help in our daily tasks.

The initial proposal for this feature was send 5 years ago, later the whole idea was a bit abandoned (without any clear reason). But now the work has been restated with the plan that we might get that into C++20.

The helper type would give us another way of reporting errors, and would be an improvement over returning “bool” or error code from functions… For example:

As you see the version with optional doesn’t use the output parameter, but we lose the full information about the error. This can improve with expected:

You can read about the rationale in the earlier version of the paper, for example V1: P0323R1.

One doubt: we have several ways of reporting errors. Is having another method good or will just make our code more complicated and confusing to use?

This feature is based on a boost library: Boost.Stacktrace 1.0 - 1.70.0 and, as name suggests allows to gather information about the stack frames at runtime.

This might be helpful in environments where setting up debuggers is hard and also enhance log messages. For example when an error happens you can also attach the stack information. That will simplify the diagnostics.

One of the dark corners of C++ is probably how to use volatile properly. The authors of the proposals make a bold suggestion on how to remove this concept from C++ so it doesn’t bother programmers in common code, but still leave it for some specific cases.

The ful rationale is nicely explained in the early version of the paper: http://www.open-std.org/jtc1/sc22/wg21/docs/papers/2018/p1152r0.html

For example the proposal suggests:

I think it might be a good approach to make the language easier without the need to know advanced concepts.

This change might break existing code, thus it might take us some time to properly add that into the Standard.

Update: This paper was merged into C++20 during the Cologne Meeting! :)

A new type of containers in the Standard Library. As you might already know std::set, std::map (and their multi counterparts) are node based containers. They usually form a binary tree and then insertion, find and other operations work on that tree.

However, an alternative solution for set is to have a sorted vector of objects. Such approach changes the performance characteristics of the container and has several advantages: especially the cache locality (a vector is contiguous in memory) and less memory consumption. This is especially important for embedded environments, or games or performance critical apps.

The downsides: possibly slower insertion and removal time (as we need to sort the vector again after insertion/removal) and we cannot store non-copyable elements inside.

A really nice summary can be found in boost: Non-standard containers - 1.70.0 - flat_set.

More motivation and scope can be found in the early version of the paper: P1222R0

New and common stats functions for the Standard Library! The proposal wants to add the following functions into the <numerics> header:

The statistics functions are pure additions to the library, so I don’t see any issues in having them. I wonder if there will be a version with ranges so that you can call std::mean(myRange).

C++20 is getting closer and closer. I hope that during the Cologne meeting will have consensus over the major features and we’ll have time to fix bugs on time.

In the article, I wanted to show the current list of items in C++20 and also mention some interesting papers that brought my attention.