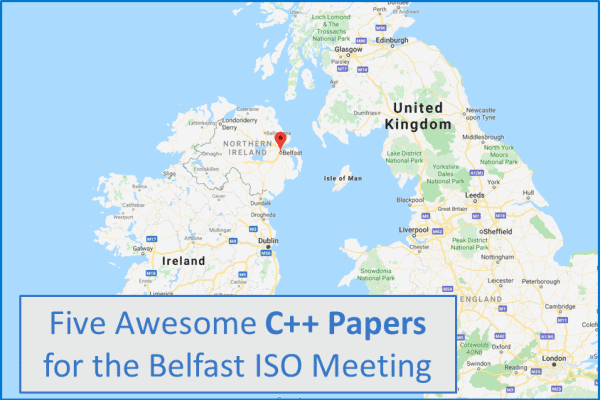 Following the pattern for other ISO C++ Meetings, I prepared a blog post where you’ll learn about:

Disclaimer: the view presented here is mine and does not represent the opinion of the entire ISO C++ committee.

Thanks to various trip reports and especially r/cpp threads we can gather a list of features that are already merged into C++20(*).

At cppreference there’s also a single list with all C++20 features:
C++2a features

Below you can find a list of meeting and features that were accepted or rejected during each session.

The first meeting that discussed and merged things for C++20

Additionally, during this meeting, the Committee agreed on a single plan for modules, so there’s a higher chance we’ll see them in C++20.

Gathered from this r/cpp thread.

Today - 4th November 2019 - another ISO C++ meeting is about to start (in a few minutes?). This time the committee gathers in Belfast, Northern Ireland.

The main topic of this meeting is to address the first round of National Body comments for the C++20 draft (from Cologne). We probably won’t see any new features added into the draft, as the Standard is in the feature freeze mode. Mostly we’ll focus on stabilising the existing elements.

If time allows the committee will discuss papers that target C++23 and beyond.

It seems that the committee likes Europe now, and the next meeting (Spring 2020) will take place in Prague (Czech Republic). Then we’ll travel to Varna (Bulgaria) for the hopefully first session that will add features into the working draft of C++23.

You can always find the list of ISO meetings here:
Upcoming Meetings, Past Meetings: Standard C++

or in a easier-to read form:

Below you can find my list of papers that brought my attention. I try to select not huge documents, but something smaller… however this time I couldn’t resist and look at some more significant things.

I’m also looking forward to getting your opinion and your selected papers.

Let’s start with something relatively small, a nice addition to the std::filesystem component:

To iterate through directories in C++17 you can use directory_iterator or the recursive version. Hovewer, they don’t support filtering. One way to reject unwanted path is to write a custom filtering code. For example:

In the above code, we use copy_if, and then there’s a lambda that filters out directory entries objects. In this sample, I store the final paths into a separate vector.

Since filtering is a handy thing, the author proposes to have direct filter support inside the directory_iterator. That way you could pass a filter lambda (with some options) straight into the iterator:

You can even have a look at the benchmark where the author compares the current solution, with the regex version and the proposal (with lambda filter).
https://github.com/bonpiedlaroute/cppcon2018/blob/master/windows/rdi_bench.cpp

Is that something useful? Or maybe it’s better to keep the design separate? I wonder how we could build such an example with ranges and views?

I want to leave you with the answers and now move to some other feature that might be very handy and modernises older techniques.

In C++20 we’ll have the formatting library: adapted from fmt library. It’s like bringing the Python formatting code and good old printf style into the modern C++.

We can follow that path and for C++23 add the parsing part! It means modernising sscanf functionality.

According to [CODESEARCH], a C and C++ codesearch engine based on the ACTCD19 dataset, there are 389,848 calls to sprintf and 87,815 calls to sscanf at the time of writing. So although formatted input functions are less popular than their output counterparts, they are still widely used.

It’s still an early stage for this paper, but I think it would be good to go into that direction and have a common interface for handling string parsing and formatting, also, with the inclusion of std::chrono stuff.

Do you often use parsing routines? Would you like to see that in the standard?

OK, let’s now move on to a bit bigger element:

That concept seems huge! It means that the library will give you a simple interface to create and manage a compact web browser! You’ll be able to write HTML, javascript and hook your C++ callbacks.

While the whole idea seems strange, I actually like the core approach for this entire paper:

it’s hard to do the graphics and UI right (and maybe audio), so why not embrace other existing standards (the web stack) and provide an interface to work with it? This will allow us to learn C++ with some nicer examples.

The library will be totally optional, so no need to implement such complex web stack on some restricted embedded environment :)

But maybe it would give us a nice way to show more cool examples out of the box, rather than just using std::cout? Or maybe we need to accept that C++ is not going into any of these directions and we should just stick to preferred third-party libraries? (like QT, WebKit or native system APIs)?

You can also follow the live discussion at r/cpp https://www.reddit.com/r/cpp/comments/900dor/stdweb_view_proposal/

So far, I mentioned three features that you might use at some point in your code, but now I’d like to show not a feature but rather a useful resource for learning C++:

I think that might be a super valuable thing to have! As the author wrote, it’s hard to go through 1700 pages of the current standard and look for the “undefined” word. It’s much easier to have a list as a good reference.

Then we can build on that and create more examples (in the TR) and learn more. Right now it’s not easy to know all the tricks in the area of Undefined behaviour, and it’s definitely not what average C++ developers are aware of.

And now we can go into more high-level discussions. A director for C++23:

It looks like the direction for C++ is as follows:

In other words, we try to embrace what we have in C++20 and then improve the overall standard. Especially the library support for modules, coroutines.

And if time allows we’ll have also:

Would you like to see more of the big things in the next Standard?

Through this article, I wanted to give you an overview of the C++20 status and also look ahead for some new things in the language and the library.

I’m happy to see what’s your top five. What are your favourite features that might be included in the next standard? or what direction should we take?