How to Convert Numbers into Text with std::to_char in C++17

In this post, I’ll show you how to use the newest, low-level, conversion routines form C++17. With the new functionality, you can quickly transform numbers into text and have super performance compared to previous techniques.

Until C++17, we had several ways of converting numbers into strings:

And with C++17 we get another option: std::to_chars (along with the corresponding method from_chars) ! The functions both reside in the <charconv> header.

Why do we need new methods? Weren’t the old technique good enough?

In short: because to_chars/from_chars is low-level, and offers the best possible performance.

The new conversion routines are:

The new methods are available in the following compilers:

This article is part of my series about C++17 Library Utilities. Here’s the list of the articles: 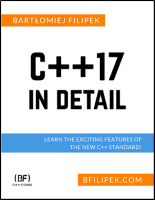 to_chars is a set of overloaded functions for integral and floating-point types.

For integral types there’s one declaration:

Where TYPE expands to all available signed and unsigned integer types and char.

Since base might range from 2 to 36, the output digits that are greater than 9 are represented as lowercase letters: a...z.

For floating-point numbers, there are more options.

The conversion works the same as with printf and in default (“C”) locale. It uses %f or %e format specifier favouring the representation that is the shortest.

The next function overload adds std::chars_format fmt that let’s you specify the output format:

chars_format is an enum with the following values: scientific, fixed, hex and general (which is a composition of fixed and scientific).

Then there’s the “full” version that allows also to specify precision:

When the conversion is successful, the range [first, last) is filled with the converted string.

The returned value for all functions (for integer and floating-point support) is to_chars_result, it’s defined as follows:

The type holds information about the conversion process:

As you can see, we have only two options: success or out of range - as there’s a chance your buffer doesn’t have enough size to hold the result.

To sum up, here’s a basic demo of to_chars.

Below you can find a sample output for a set of numbers:

On MSVC (starting from 15.9, full support in 16.0 + improvements later) we can also try the floating-point support.

Below you can find a sample output for a set of numbers:

In my book, I did some perf experiments for integer conversions, and the new functionality is several times faster than to_string or sprintf and more than 10… or even 23x faster than stringstream versions!

I also have to check the floating-point support, but the results that I see from various places also claim order of magnitude speedup over the older techniques.

See the Stephan T. Lavavej’s talk about implementing charconv in MSVC where he shared some floating-point benchmark results.

In C++20, we’ll have more methods that allow us to convert data into strings and format them.

The library is called std::format and is based on a popular framework {fmt}

So far (Nov 2019) any of the standard library implementations don’t offer std::format, but we can try an example from the base library:

You can also check out this blog post that nicely introduces you to the concepts of {fmt}:
An Extraterrestrial Guide to C++ Formatting - Fluent C++

As for the benchmarks you can read this one: http://www.zverovich.net/2013/09/07/integer-to-string-conversion-in-cplusplus.html, but unfortunately there’s no comparison with std::to_chars.

With C++17, we got new functionality that allows easy and low-level conversions between numbers and text. The new routines are potent and expose all the information you need to create advanced parsers or serialises. They won’t throw, won’t allocate, they bound check, and they offer super performance.

Extra: since CppCon 2019 Microsoft opened their STL implementation, so you can even have a look at the code of charconv!

And maybe there’s hope that the code will be used in GCC and Clang library implementations, as they lack for floating post support now. Do you know any rumours about that?

I also highly suggest watching Stephan’s talk about the progress and the efforts for full charconv support. The feature looked very simple at first sight, but it appeared to be super complicated to support as the C library couldn’t be used, and everything had to be done from scratch.

What do you think about the new conversion routines? Have you tried them?
What other conversion utilities do you use?